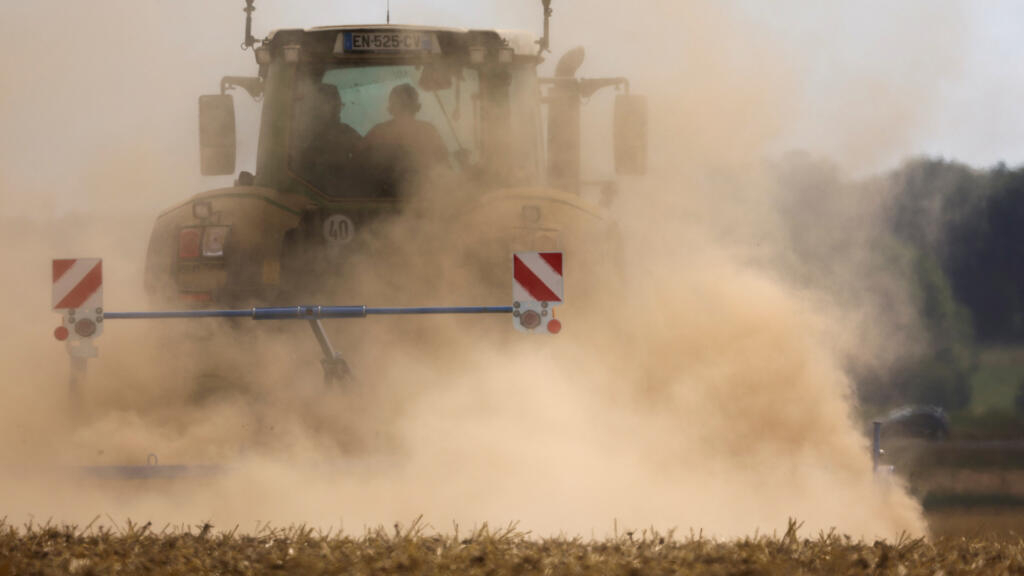 As much of Europe endures a third heat wave since June, fears are mounting that extreme drought triggered by climate change in the continent’s breadbasket nations will affect stable crop yields and deepen the cost-of-living crisis.

The European Commission on Wednesday urged EU member states to reuse treated urban wastewater as irrigation on the continent’s parched farms, after France and parts of England experienced their driest July on record.

In France, where an intense drought has hit farmers and caused widespread limits on freshwater use, there was just 9.7 millimeters (0.38 inches) of rain last month, Meteo France said.

That was 84 percent less than the average levels seen in July between 1991 and 2022, making it the driest month since March 1961, the agency added.

Farmers across the country report difficulties feeding livestock due to dry grasslands, while irrigation has been banned in large areas of the northwest and southeast due to a shortage of fresh water.

Environment Minister Christophe Bechu said the July rains represented “only 12 percent of what is needed”.

France is the fourth largest exporter of wheat and one of the top five exporters of corn globally. Crop failures due to drought may increase pressure on grain supplies after the Russian invasion of Ukraine caused a global shock.

“Our food system has been under pressure for a while, and with Ukraine’s supply problems, that has only gotten worse,” said Shouro Dasgupta, an environmental economist at the Euro-Mediterranean Center on Climate Change.

“These heat waves add to the droughts and will cause crops to wither faster.”

Dasgupta said extreme heat brought on by climate change is also contributing to food price inflation for consumers and harsher conditions for producers.

“And during heat waves, outdoor workers are only able to work fewer hours, leading to cascading shocks to supply.”

Britain’s Meteorological Office said this week that much of southern and eastern England had its driest July on record.

Some water providers have already announced restrictions affecting millions of people, and fruit and vegetable growers have announced several crop losses, such as beans and berries.

Britain’s inflation rose to a 40-year high in June on rising fuel and food prices.

Elizabeth Robinson, director of the Grantham Research Institute on Climate Change and the Environment at the London School of Economics, said skyrocketing food costs, made worse by heat-induced losses in Europe and Britain, it was a sign that “food systems are not working.” working for the people.

“There are some difficult long-term conversations that need to be had, particularly about food waste and the diversion of grains from food for people to feed to animals,” he told AFP.

In Spain, already parched under a prolonged heat wave, temperatures will exceed 40°C in several areas this week.

The heat is worsening the water shortage that has affected Spanish agriculture since last winter, with local restrictions on water use in the worst affected regions.

The government said this week that Spain’s reservoirs are at 40.4 percent of capacity.

Juan Carlos Hervás, from the farmers’ union COAG, told AFP that the rain-fed olive harvest in Spain will be less than 20 percent of the average of the last five years.

Spain supplies almost half of the world’s olive oil.

‘Worst drought of this century’

Portugal, along with Poland, has asked its citizens to reduce their water use to ease the pressure.

“Water authorities across Europe are not prepared for what scientists have been saying for three decades,” Dasgupta said. “A high incidence of heat waves will affect the water supply.”

The European Commission, in an updated assessment last month, found that nearly half, 44 percent, of the EU and Britain were currently experiencing “warning” levels of drought.

It warned that exceptionally low levels of soil moisture mean that several countries, including France, Romania, Spain, Portugal and Italy, will experience reduced crop yields in 2022.

“Unfavorable forecasts for the coming months may compromise the water supply and will probably keep competition for this resource high,” he said.

On Wednesday Virginijus Sinkevicius, EU Commissioner for the Environment, Fisheries and the Oceans. he urged EU nations to reuse more of their wastewater.

“We need to stop wasting water and use this resource more efficiently to adapt to a changing climate and ensure the security and sustainability of our agricultural supply.” he said.